HUNTINGTON - Republican gubernatorial candidate Bill Cole came to Huntington for the third time in as many weeks Monday to learn more about the work that is being done to help those affected by substance abuse.

Cole met with officials of Prestera Center at Prestera's Pinecrest location along U.S. 60, where he also toured the facility and learned more about what resources are and are not available at the center.

Cole, a native of Bluefield, West Virginia, said Huntington was an important place to come for anyone seeking results in the struggle with substance abuse.

"This program is highly regarded," Cole said about Prestera. "So many times in government, we measure compliance rather than the actual results of the programbut I'm trying to go to the places that are having great success to understand what they do differently. We need to repeat that many times around the state." 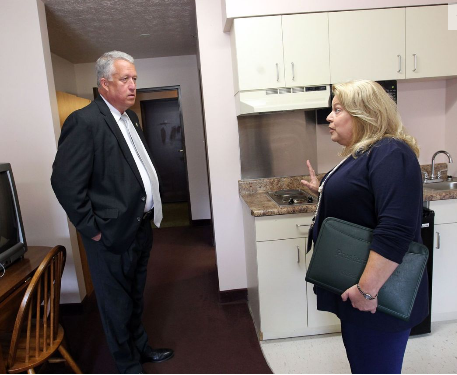 Cole released a seven-point plan to address West Virginia's problem with substance abuse on Aug. 16, one day after 27 people overdosed in Cabell County from using what authorities believe was a batch of heroin laced with a stronger drug, possibly fentanyl.

Two points of Cole's plan involve making available more avenues and options for recovery treatment for those suffering from substance abuse and creating an Office of Drug Action in the governor's office.

The Office of Drug Action would coordinate public, private and nonprofit efforts to better seek solutions.

Those areas in particular would affect Prestera, which already provides recovery treatment, and its staff members, including Karen Yost, CEO of Prestera Center, who serve on similar task forces locally.

Yost said it was her goal to have Cole, as well as the general population look at mental and behavioral health as part of their overall health.

"The primary thing is behavioral health is part of general health," Yost said. "You cannot separate the two, and to be healthy, people have to have a strong sense of themselves. We all have problems, and that behavioral health piece is so critical to our overall health."

Yost said traumatic events, especially those experienced in childhood, can have an impact so lasting that it not only leads to addiction issues, but it also cuts years off of a person's life.

She said she hoped that anyone seeking office would also seek an understanding of how behavioral health can play a role in helping curb addiction and change lives throughout the state.

Cole said he thinks the level of understanding substance abuse is slowly growing, but he said there is no easy solution.

"This isn't a Democrat or Republican issue," Cole said. "This is an issue that faces every West Virginian. I think it would be easy to garner the support we need to move forward quickly and fight this problem head-on."